Since 2016, Brighton’s Thyla have had us wrapped around their finger, eagerly anticipating every new release they’ve shared in the past three years. Now their debut EP “What’s On Your Mind” joins the list and the high expectations have been surpassed greatly as the indie scenes’ ‘next big thing’ have blown everyone else out of the water. 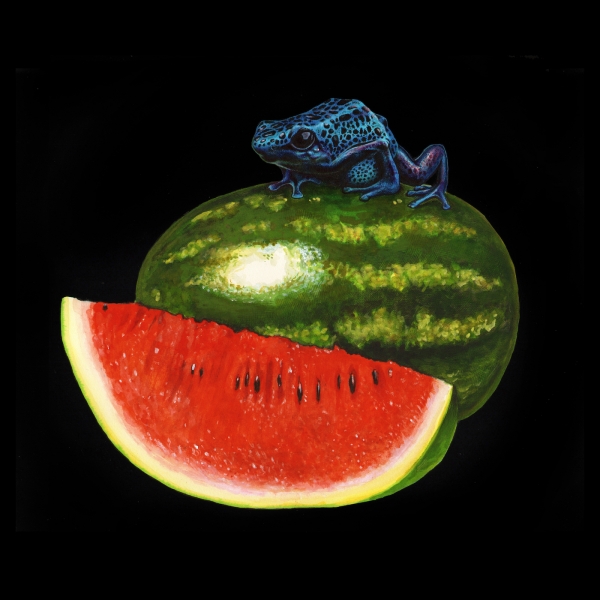 Becoming the ‘next big thing’ has never been a focus for Thyla, rather a label now rained upon them by every media outlet that has listened to a second of their music. The comparable notes to Wolf Alice are unavoidable because of this. A group that seemingly came out of nowhere, quietly disrupting their local scene before grabbing focus and exploding into the mainstream. Thyla may not quiet have the grasp on the mainstream that Wolf Alice have, but the era of Thyla is rapidly approaching and everyone else in the game should be utterly terrified.

Millie by herself is enough of a force to be reckoned with, however, when placed with Danny, Dan and Mitch, Thyla’s presence is unquestionable, with all heads turned their way with no room for a second thought.

This immediacy of Thyla comes full force on opener “Only Ever” a maelstrom of warped guitars welcoming you into their magnetic energy only seconds in, before Millie’s soft vocals reign in the destruction of Mitch’s guitars. Then to be overtaken moments later by Danny’s rapturous drumming, the real que for Millie and Mitch to reign utter chaos on us all comes, with Millie rising into her signature roar, screaming at the top of her lungs, while Mitch whips up a frenzy, boosted ever further by Dan’s bass, neatly tucked in to amplify everyone’s sound to a 12.

The second EP single “Blue”, quickly follows suit with a plethora of guitar riffs ready to blow the roof off yet again, although this time, Millie’s lyrics invoke a sense of self evaluation and the doubtfulness that plagues her mind. “Have you ever been a victim of your own mind?//I’m still trying to understand my misery” “Blue’s” words speak open and honestly about self-doubts and anxiety in the social media age where an online presence can quickly take over the every day life; riding on a wave of indie rock, lightly dusted in their grunge-gaze style, for a true taste of their expansive genre blending and all too relatable lyricism.

Following “Blue” comes the first single released by Thyla to feature bassist Dan as the lead vocalist, with a nod to the late 90’s early 00’s on “Bitter”. A monotonic greeting welcomes you with the line of “I Guess I’m Just Bitter to the bone, I ain’t fitted for this throne” as Dan’s drained vocals capture the notion of underachieving in the online world, whether it be from a lack of ‘likes’ or followers on social media platforms, evolving upon the idea of social isolation from Radiohead’s OK Computer, now declaring that a lust for interaction has doomed us all into prominent isolation.

The theme of online isolation and anxiety continues on with the first single to be taken
from “What’s On Your Mind” the illustrious “Candy”. With its opening line of “My teeth fall out in my dreams” a sense of impending doom is utterly apparent, seemingly coming from nowhere, yet being totally inescapable. This essence of impending doom continues as Candy slowly dissolves into the trademark Thyla style, overloading on shoegaze and grunge rock, mixing spiralling riffs together with Millie’s harrowing screams. Then, like waking from a nightmare, Candy comes to a calming end, leaving the chaos behind ready to embrace the light of the world on the EP’s title closing track “What’s On Your Mind”.

The aftermath of “Candy”, “What’s On Your Mind” covers the anxieties that Millie faces, “I hear your voices in my sleep, and I’m afraid of them, awake again”, tackling her nightmares head on in an unfamiliar reality, remaining difficult for her to even understand where her dreams and real life end. Her own vigilance against these nightmares and the unwanted “it could be worse” philosophy shines through like a ray of sunlight breaking through the grey sky, penetrating the impenetrable even only if just, remaining fiercely brave and stronger than ever before.

On “What’s On Your Mind”, Thyla feel as if they’ve let off the weight of the world, sharing thoughts that everyone can however uncomfortably relate to. The eponymous shoegaze style of the Brighton group is enough to suck in waves of casual listeners, that sport goosebumps at the sound of riffs covered in reverb, while their indie/grunge rock lust is an even stronger reason to stick around. Once Thyla’s face value wares off, that’s when you’ll find yourself truly in deep with the four piece, totally enamoured with their reflections on reality and bitter-sweet riffs. “What’s On Your Mind” provokes so much more than that one question. It’s unquestionable now whether Thyla will be “the next big thing” as history will never forget them now following this truly magnificent EP.